0
was successfully added to your cart.
Sale! 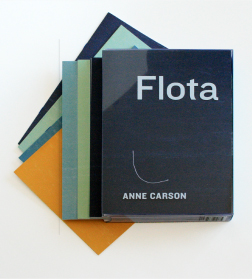 A new work by Anne Carson that investigates myth and memory, beauty and loss, playing and exploring the limits of language and form, as is customary in her poetry. Strongly rooted in the classical Greek-Latin tradition, she has the strange ability to transform this heritage into the vanguard.

In words of the American publisher of Float (Alfred A. Knopf): “To date, the most intellectual and emotionally attractive and electrifying book from A. Carson”

In Float, Carson once again shines with her inventiveness and formal experimentation. This book comes in a striking and original format: individual brochures that can be read in any order and that “float” within a transparent box.

In one of these booklets we can contemplate Proust in a frozen Icelandic plain. In another we are in the saturated art streets of the centre of New York. One of the brochures is about a trip to the top of Mount Olympus, where Zeus reflects on his own life. The poem called “Wildly Constant” explores the highs and lows of marriage and monogamy through a wife who wakes her husband in the midst of the darkness of night asking him to make eggs for breakfast. Along with them, Lou Reed, Gertrude Stein or the pythoness Cassandra are converted into characters who populate the imagination of Carson and of her magnificent and suggestive work Float.